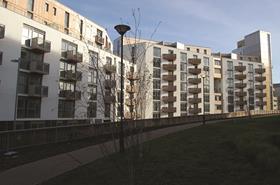 One Brighton housing scheme was built to zero carbon standards

A delay to the publication of revisions to regulations that govern the energy efficiency of buildings, considered crucial for delivering the UK’s carbon targets, could put back implementation of the changes by up to six months, industry figures have warned.

In March, the Budget statement committed the government to “publish a detailed plan, setting out its response” to its 2012 consultation on changes to Part L of the Building Regulations by May 2013. But that announcement has not materialised.

The Part L regulations set out the energy efficiency requirements for buildings and are critical to the introduction of the zero-carbon homes requirement in 2016 - a key part of the government’s commitment to cut the UK’s carbon emissions.

The government’s preferred option in its consultation, which closed in April 2012, would see an 8% hike in carbon efficiency standards for new homes and 20% for commercial buildings.

Sources close to the situation told Building this week that proposals were expected to be published before the start of parliament’s summer recess on 18 July, but that they was unlikely to contain all the details of the changes.

One source said the delay meant the original implementation date of October 2013 now looked “highly unlikely”, largely because successive governments have always given industry six months to prepare for changes in regulation.

The preparation period is important for adjustments to be made to the SAP and SBEM systems used to calculate energy requirement compliance and in order to give manufacturers time to develop products to meet the new requirements.

Convention also dictates that changes to Building Regulations come into force in either April or October, leading sources to expect that the changes will not now come into force until April 2014.

The longer it goes on the more problematic it is. clients could be hit by higher costs

The hold-up is understood to be caused by protracted discussions between the communities department and other departments about a number of provisions in the regulations. Fears have been compounded by the fact that a meeting of the Building Regulations Advisory Committee (BRAC) scheduled for last week was cancelled. The government is required to consult BRAC on changes to building regulations.

Andrew Mellor, partner at PRP Architects and head of PRP Environmental, said he feared that a delay in implementation until April 2014 could make it difficult to introduce the zero-carbon homes requirement in 2016 because changes to the regulations have always stood for three years.

“The longer it goes on the more problematic it is. Potentially clients could be hit by higher costs [because you have to design things twice],” he said.

Hywel Davies, technical director at the Chartered Institution of Building Services Engineers, said designers were having to model buildings twice because of the uncertainty, adding to costs.

“It’s taking money away from other projects and in some cases the work is not being done at all because [clients] are saying: ‘Until we have some certainty we won’t bother’. That isn’t good for growth,” he said.

When asked if the government was still committed to the October implementation date a communities department spokesperson declined to say, adding: “The department is still working on the Part L announcement, which will be made in due course.”

Reaction to the Part L delay

Paul King, chief executive of the UK Green Building Council, said: “It’s been almost three months since the Government restated its commitment to zero carbon, promising an announcement by May. Yet two weeks on from this date we are still in the dark about the future direction of this essential policy.

“What builders need is certainty - and this is anything but. While the Coalition continues to dither over zero carbon, product manufacturers and the supply chain are losing out, putting jobs and much needed growth in the construction sector at risk.”

WSP’s sustainability director David Bownass said: “Given the lack of ambition in the proposed Part L 2013 changes, particularly for dwellings, and the uncertainty in even implementing a small step towards the Fabric Energy Efficiency (FEE) standard in 2013, the already “watered down” zero carbon proposals in 2016 must be in jeopardy. The delay only adds to the uncertainty and undermines the Government’s own ambitions for growth through construction.

“It’s now likely that the final changes will be rushed through and the Government would be well advised to pause and ensure the revised National Calculation Methodology (NCM) software is thoroughly tested before release or more chaos will ensue.”

Andrew Warren, director of the Association for the Conservation of Energy, said: “It is ludicrous that 450 days after the consultation the government is still unable to tell the building industry either what they plan to do nor when they plan to do it, regarding upgrading minimum energy standards.

It is now four months since the CEOs of eight leading construction businesses formally wrote to Mr Pickles, to explain to him yet again how very damaging and costly this continuing uncertainty was being, regarding both training and capital investment for both the short and long term.

All this is particularly urgent as the original schedule had these new regulations in force by April 2013 – and let us remember that when the government came into office in May 2010, the building regulations minister  was initially talk of this upgrading beginning during 2012 .

Everyone assumed that the Chancellor’s quite specific commitment in his March Budget speech, that an announcement would at last  be made in May, would mean progress. But obviously not.  Let us hope he didn’t really mean waiting until May 2014, rather than 2013.”