Mace, Bam and Brookfield were battling for project that is now delayed by at least a year with procurement of main contractor suspended 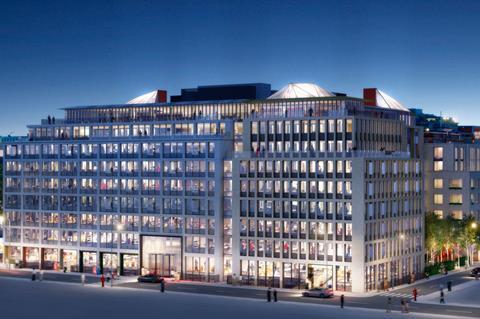 Derwent London has put the £150m redevelopment of the Saatchi & Saatchi office building in Fitzrovia, London, on hold, with the project delayed by at least a year.

As Building revealed in January, Mace, Bam Construct and Brookfield were all in the running for £150m Make-designed scheme at 80 Charlotte Street & 65 Whitfield Street in Fitzrovia, which gained planning in September 2011.

Construction on the project, which will comprise 323,000 sq ft of offices and 14,000 sq ft of private residential units, was expected to be underway later this year, with completion due in the second half of 2015.

However, Derwent London has confirmed the project is on hold, with procurement of the main contractor suspended.

The developer said the project was likely to recommence in the first half of 2015, with completion set for the second half of 2017.

Derwent said that the move was a consequence of it pre-letting space at Turnmill and 40 Chancery Lane - two other Derwent schemes currently under construction - to global communications agency Publicis Groupe, the parent company of Saatchi & Saatchi, which is the current occupier of 80 Charlotte Street.

Because both Turnmill and 40 Chancery Lane are not set to reach completion until mid-2014, Derwent said Publicis Groupe would now continue to occupy 80 Charlotte Street longer than initially planned.

In a statement Derwent said: “Whilst Turnmill and 40 Chancery Lane are being completed, agencies of Publicis Groupe, will continue to occupy their existing offices at Derwent London’s 80 Charlotte Street.

“Therefore, the start of the … redevelopment of this property is now likely to commence in the first half of 2015 with completion scheduled for the second half of 2017.”

As Building revealed in April, Bam Construct had emerged as favourite for the main contractor role on the project, after being appointed to provide pre-construction advice on the scheme, as well as developing a Building Information Modelling (BIM) system of the development.