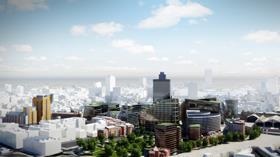 Developers Delancey and Landid have been named preferred bidder to develop the £800m Northern Gateway scheme in Manchester by the Co-Operative Group.

The site surrounds the Co-Op’s new £100m headquarters due to be completed by Bam later this year.

David Pringle, the director in charge of Noma, told today’s Times: “Delancey and Landid have both demonstrated their ability to carry out large mixed-use developments and their commitment to Manchester through previous developments.”