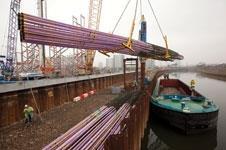 Industry experts have criticised the delayed boost in infrastructure spending, which will not come into effect until 2015-16.

The government will increase infrastructure spending by £3bn a year from that financial year, paid for by cuts in departmental current spending.

The Civil Engineering Contractors’ Association (CECA) called it a “jam tomorrow” budget, while the RICS, PwC, WSP, Pinsent Masons and ICE all criticised the late timing and limited extent of the funding.

CECA director of external affairs Alasdair Reisner said: “The Chancellor rightly describes the UK’s infrastructure as the “economic arteries” of the country, and that investment in the sector will “get growth flowing” to every part of the country.

“CECA believes that the Chancellor has arrived at the correct diagnosis, but has yet to administer a cure.”

He added: “Across the regions and the nations it’s the smaller repair, maintenance and upgrade projects which can be picked up by medium and small construction businesses.

However other organisations – including engineer Atkins and the Electrical Contractors Association – gave the infrastructure boost an unfettered welcome.

Full reaction to the 2013 Budget here.