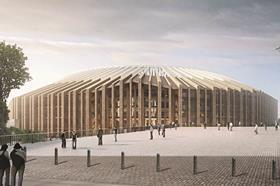 The developer behind the £12bn regeneration of Earls Court, west London, has crossed swords with Chelsea Football Club over the proposed £500m-plus redevelopment of the Premier League champions’ stadium.

Capco has written to the local authority overseeing both schemes, Hammersmith and Fulham, raising concerns over a “lack of detail” supplied by Chelsea on how it intends to build the spectacular Herzog & de
Meuron-designed redevelopment of nearby Stamford Bridge.

In the letter, sent on Capco’s behalf by planning consultant DP9 and seen by Building, Capco criticises the planning application’s “very high level and broad-brush” approach and claims it gives “no information” on construction logistics or construction vehicle numbers and only a “basic summary” of excavation and traffic expectations.

Stamford Bridge is immediately to the south of Capco’s vast 77-acre Earls Court development and construction timetables on the two schemes are likely to overlap.

Construction has already begun on the first phase of Earls Court, which will ultimately deliver 7,500 homes, a new high street and local amenities, while the Chelsea scheme is expected to take about four years to complete.

In the letter to council planners, dated 7 January 2016, Capco said it was undertaking a “large and complicated” technical review of the planning application and the firm reserved the right to “make fuller representations” after the planners’ deadline for submissions of 8 January.

The letter adds: “It is envisaged that this review will raise a number of questions and queries.”

It continues: “We consider that a lot more detail is required in order for a robust assessment to be achieved prior to any determination being made”.

Chelsea FC submitted its plans in November last year. Under them, Stamford Bridge’s capacity will be increased from 41,600 to 60,000.

The Westminster Abbey-inspired gothic remodel is to be fully funded by Russian oligarch and Chelsea owner Roman Abramovich and built in brick.