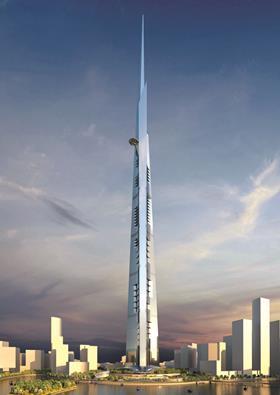 An EC Harris and Mace joint venture has won a blockbuster contract to project manage construction of the world’s tallest skyscraper – the kilometre-tall Kingdom Tower in Jeddah, Saudi Arabia.

The tower’s developer – Jeddah Economic Company (JEC) – sent the UK-based firms a letter of intention to appoint them on the $1.2bn (£800m) project this week.

Batterjee said: “We were impressed by the qualifications of their staff. One of the reasons we hired them is they are going to use the same team that was on the Shard.”

Once completed, the skyscraper will overtake the world’s current tallest tower, the 828m Burj Khalifa in Dubai. The Kingdom Tower will be over three times as tall as the 308m Shard.

Batterjee said groundworks will “hopefully start by the middle of this year” and confirmed the planned construction programme will take 63 months, or just over five years, which could mean completion as early as 2018.

Batterjee also revealed the developer is close to appointing a further UK firm as quantity surveyor on the project. He said JEC and the unnamed UK QS are in “final negotiations on contract terms” and an agreement could be reached by the end of next week, but he declined to disclose the company’s identity.

He said the prospect of three UK-based firms on the project was “pure coincidence”. “They submitted the best bids”, he added.

Nevertheless the news follows a series of high-profile wins for UK consultants in the Middle East.

Kingdom Tower will form the centrepiece and first phase of the wider $20bn (£13bn) Kingdom City, a mixed-use district to the north of Jeddah.

Batterjee said overseas bids from all countries – including the UK – would be “welcome” on further Kingdom Tower and Kingdom City packages of work.

Batterjee – who has 33 years experience managing projects, including two $1bn-plus construction schemes – said he is planning to visit the Shard for the first time by the end of March.

He said Kingdom Tower will be “the first icon for Jeddah and the region” and will demonstrate the “stability” of the Saudi Arabian economy.