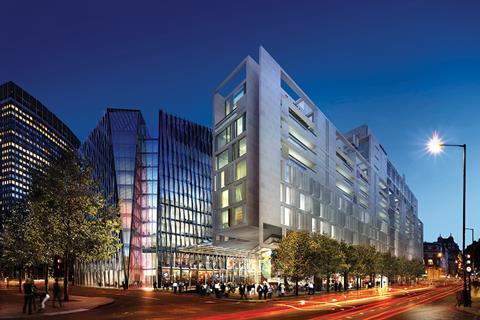 Mace has won a £250m job to build a major mixed-use scheme in London’s Victoria, Building can reveal.

Industry sources said that Mace had won the main contractor role on the 1 million ft2 Victoria Circle scheme for Land Securities (pictured), thought to be worth around £250m.

The scheme is the latest and largest scheme in Land Securities’ 15-year transformation of Victoria. By 2018 the developer will have delivered almost 3 million ft2 of redeveloped or new space in the area over the period.

Building understands the development’s slanting design is influenced by the rights of light requirements of nearby properties, including Buckingham Palace.

The Victoria Palace Theatre, situated at the South-east corner of the site, will be retained. The theatre was built in 1911 and has been showing Billy Elliot the Musical since 2005.

Demolition of the other buildings on site is under way by demolition contractor Keltbray.

Other Land Securities developments in the area include the under-constructiton Zig Zag Building and Kings Gate, 62 Buckingham Gate and the planned redevelopment and conversion from offices to residential of Portland House.

The developer completed refurbishment of nearby 123 Victoria Street last year and the 660,000ft2 mixed-use development Cardinal Place in 2006.