Energy from waste jobs cause Bouygues profits to slide 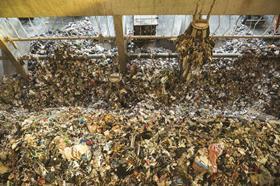 Bouygues has warned profits will be lower in 2018 after becoming the latest contractor to suffer problem jobs in the UK’s energy from waste (EfW) sector.

The Paris-based construction giant is building two biomass power plants in the UK, including one for AssetGen Partners in Hertfordshire, but in a statement said the jobs had “experienced difficulties during the recent testing and commissioning phases, related mainly to malfunctions on certain equipment, leading to delays, additional costs and compensation paid to customers”.

The firm said the operating profit and operating margin of its construction businesses will fall in 2018 – despite a previous forecast of improvement.

Bouygues joins Interserve and Sir Robert McAlpine, who have both run into trouble on EfW contracts. Interserve and McAlpine vowed to leave the sector after racking up losses of £227m and £37m respectively.

Bouygues said it also faces issues in Ireland, where a design and build contract was terminated by client Gemini DC Fund. Bouygues said the arrangement “has entered a new phase of litigation following the request by the client for payment of the maximum amount of compensation”.

The group also reported problems with rail and pipelaying contracts in France. As of 1pm on Friday, the announcement had sent Bouygues’ shares plummeting 10% below Thursday’s close.