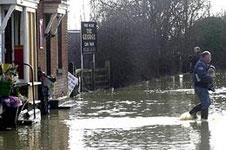 Engineers have called on the government to use next month’s Budget to restore flood protection spending to pre-2010 levels in a bid to stave of future flood damage.

In its submission to Treasury ahead of the March Budget, the Institution of Civil Engineers (ICE) urged government to return capital and maintenance investment in flood risk management to pre-2010 levels in real terms.

The ICE also called on the government to commit to a longer term investment programme for flood risk management - beyond the current 5 year programme - and to work more closely with local authorities to target flood spending where it is needed most.

The calls follow a recent warning from the Committee on Climate Change that investment in flood defences in this spending period is £500m behind the identified need, risking an extra £3bn in avoidable flood damages in future years. T

ICE director general Nick Baveystock, said: “While Government funding for flood risk management rose to £370m in 2015-16 and is protected in real terms to 2020-21, unfortunately this provides neither the level of investment or long term certainty required to improve resilience against flooding.

“The reductions to the maintenance settlement are also concerning, and as the recent flooding and coastal surges have shown; the flood defences protecting our communities, businesses and the other vital infrastructure networks and services we depend on, must be maintained - regularly and comprehensively.

“The £130m recently pledged by government to help fund emergency repairs and maintenance following the recent events is welcome - however, it does not make up for the cuts made in the 2010 Comprehensive Spending Review.

“This under-spend has been detrimental to communities, business and infrastructure and Government has an opportunity at the March budget to address this - demonstrating its commitment to decision making for the longer term and ensuring flood spending is targeted effectively.”