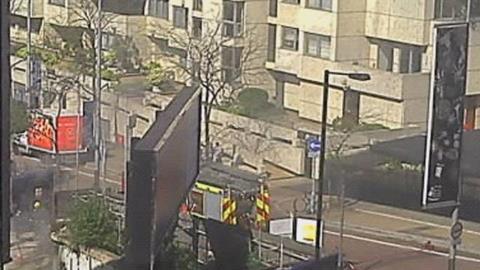 Blaze started at around 11.45am and two fire engines called

The fire brigade have been called to extinguish a fire on an overspill site for work on Blackfriars station in central London.

Smoke can be seen rising from an underground passage on the site, just south Blackfriars station, which is being used to store materials for construction work for the main project.

Two fire engines have arrived to extinguish the blaze with hoses.

Work has stopped on the site, with workers watching firefighters extinguish the blaze.

The land is the site of the mooted Jumeirah tower project, which went into administration last October.