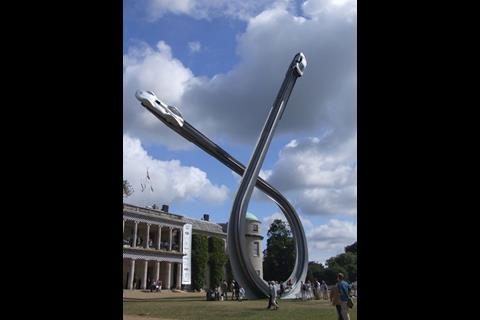 Gerry Judah's sculpture for the Festival of Speed 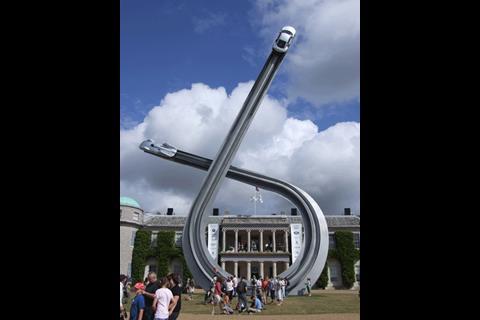 About the scheme: This sculpture, designed by artist Gerry Judah and engineering firm Capita Bobrowski, was on show at the Festival of Speed in Goodwood in West Sussex last month.

The display, which coincides with Audi’s 100th birthday, incorporates a 1937 Auto Union Streamliner and an R8 V10 sports car. The 44-tonne, 32m high structure is made entirely from steel.

Tom Greenall’s verdict: From relatively inauspicious beginnings, with a classically-styled monumental prancing horse for Ferrari in 1997, Judah’s sculptures for Goodwood’s annual Festival of Speed have escalated to become an anticipated centrepiece for the festival’s events.

Having now worked on sculptures for Ferrari, Jaguar, Porsche, Audi, Renault, Honda, Ford, Rolls-Royce, and Toyota, Judah’s auto-enthused 2009 sculpture is once again in homage of Audi, as the esteemed German manufacturer celebrates its centenary year.

Reportedly the most technically ambitious structure ever created at Goodwood - and certainly the most visually audacious - the Audi loop incorporates two iconic machines from either end of a ’long and triumphant’ sporting century.

However, despite this technical audacity - and in contrast to the visual complexity of previous years - the Audi loop is a piece of ’remarkable purity’. This makes it, in my opinion, the most successful Festival of Speed sculpture yet, and highly appropriate for a car-maker that has made modern design a central tenet of its approach.

The Audi loop is a piece of remarkable purity,

In terms of sculpture, the piece would sit happily next to one of Claes Oldenburg’s giant replicas of everyday objects, like an enlarged piece of a child’s Scalextric set rammed into the ground, and with all the joy of one of James Wines and SITE’s supermarket installations.

Similarly to Wines, Judah’s piece walks a line between art, architecture and advertising. However, this year, unlike any other (Land Rover 2008, Toyota 2007, Honda 2005, for example) the Audi loop avoids any aesthetic association with the car showroom.

Instead, it captures the essence and optimism of a more exposition-like piece, ensuring a more enduring memory, unrestricted by its necessary corporate identity.

Ian Douglas-Jones’ verdict: Judah is back at Goodwood. Now as permanent fixture in the racing calendar as Goodwood itself. Judah has been awing visitors for nine consecutive years with vehicular based sculptures of epic proportions.

Endorsed by the big brands, each yearly sculpture captures the spirit and essence of that years chosen car maker.

I suspect a bit of client pressure there. After all it really is just a big advert,

The art deco like Streamliner is steeped in history. In 1937 racer Bernd Rosemeyer drove a V16 version to 252mph on public road, reckless fearless or just a car that’s capable? And the new car? Well, Vorsprung durch Technik is evident, and fortunately Judah has captured all of that yesteryear excitement and buzz as well as including the rather soulless new car…

I suspect a bit of client pressure there. After all it really is just a big advert.

The soaring curves are reminiscent of a banked speedway, together with arrow straights give the 44tonne steel and aluminium sculpture the elegance and grace of silk, with poise and calibration of the cars mounted 32m up.

Metal streams back from the cars as if torn from the air as the tires bore forward. Less delicate ballet, and more shear accuracy and power, Royce’s Spirit of Ecstacy seems like a wimp in comparison.

Whilst the motoring industry is crashing all around, Judah’s new work is a dynamic edifice to Audis past on one hand; yet it serves as charging optimism on the other….

Architects Tom Greenall and Ian Douglas-Jones graduated from the Royal College of Art this year. Read about Douglas-Jones' final degree show at Towards New Capital. Greenall's final project will be on Building in two weeks time.
For the latest jobs in architecture worldwide visit Building's specialist job site.