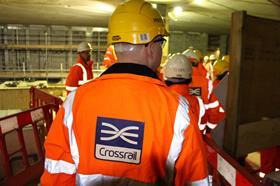 The man charged with completing Crossrail has admitted there is a "fundamental issue" with productivity on the scheme.

Fronting the Transport for London board on Wednesday, Wild said the £17.6bn project was in need of a "breakthrough" to improve productivity.

Wild said: "There is a fundamental issue with our productivity.

"The project has become so complex and conflicted we need a breakthrough to really release that productivity."

Wild told the board that is chaired by London mayor Sadiq Khan he felt a revised plan for getting the project done, which Crossrail's board was due to discuss at its meeting yesterday (Thursday), would improve productivity.

Khan also used the meeting as an opportunity to take another swipe at ousted Crossrail chair Sir Terry Morgan.

Khan said: “I’m very impressed by the openness …which was not the case with previous chair. The cultural difference is remarkable.”

London's mayor added that he, along with Wild and Crossrail's new chair Tony Meggs, had agreed to speak to the London Assembly once a window for when the project would be completed was announced next month.

Khan said he felt this was necessary "to rebuild trust" between the project and the Assembly, which he said had been lost under the former leadership team.

Meggs and Wild are also expected to front the Public Accounts Committee in the middle of May, while the National Audit Office is set to release a value for money report on Crossrail earlier that month.