Scheme for Christie will be finished next year

Galliford Try has won a £26m deal to build a cancer centre in Macclesfield.

Designed by AFL Architects, the two-storey scheme (pictured) was approved by Cheshire East council in September and will be The Christie’s first project outside Greater Manchester. 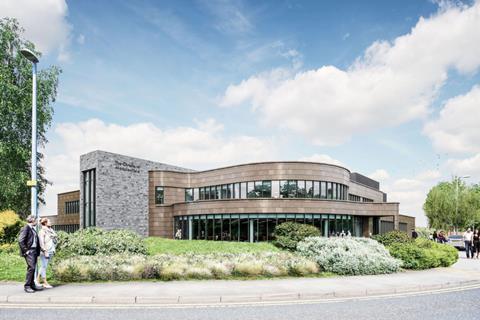 Set to be completed by summer next year, work will start in earnest on site in the next few weeks once an existing mental health unit on the site has been demolished.

Located at the Macclesfield District General Hospital, the centre will combine radiotherapy, chemotherapy and palliative care services along with a clinical trials facility.

The Christie is working with Vinci on the £150m Paterson building, a cancer research centre, in Manchester after the previous building was damaged by fire in 2017.

Just before Christmas, original contractor Interserve was replaced by Vinci on the 10-storey building which has been designed by BDP.