TfL reduces amount of money pledged to scheme by £20m 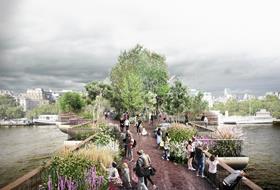 Lambeth council has forced TfL to slash its public funding for the Garden Bridge by two thirds.

In return, the council has agreed to resume negotiations over the proposed bridge designed by Thomas Heatherwick, which will be built by a Bouygues, Travaux Publicis and Cimolai joint venture.

The news removes one of the last major obstacles to the construction of the £175m bridge. Opponents had hoped the wrangle would hold it up for so long the whole project would be scuppered because of a logistics clash with the Thames Tideway Tunnel.

TfL said today that it will cut its £30m contribution to £10m. The Garden Bridge Trust said it would make up the shortfall by raising more private-sector funding, or by “paying back any TfL monies over a period of time”.

The bridge was kick-started by two major handouts from public coffers - the Chancellor promised £30m, which was matched by Boris Johnson, as head of TfL.

The decision means that the negotiations over land for the bridge’s southern landing site, in Lambeth, will resume.

Council leader Lib Peck suspended negotiations in September saying not enough progress had been made in attracting funding from the private sector.

Today she issued a statement saying: “I’m pleased that Londoners are getting a better financial deal particularly at a time of austerity when all public sector organisations are being forced to make deep cuts to services.

“We’ve been in tough negotiations with the Garden Bridge Trust and Transport for London and I’m pleased we’ve successfully agreed a deal that will cut London taxpayers’ contribution towards the Garden Bridge by two thirds.”

The chairman of the Garden Bridge Trust, Mervyn Davies, said: “We are delighted to move forward with the project.

“We have been hugely successful in our efforts to raise funds from the private sector, with £85m pledged to date, and we have agreed that any of the committed funds from TfL spent over the £10 million will be treated as a loan. We are delighted the Garden Bridge can now progress and are grateful for all the support we’ve had.”

The Trust said it expects work on the scheme to start at the beginning of next year.