The charity behind Thomas Heatherwick’s Garden Bridge has launched a PR offensive after being stung into action by a backlash against the scheme.

Opposition to the scheme in central London has grown steadily with a number of high-profile opponents – including St Paul’s Cathedral – objecting to the £175 million bridge with a number claiming it is nothing more than a vanity project in the wrong part of London.

Last year, Building’s sister publication BD revealed that people wanting to visit the bridge in groups of eight or more will have to apply for permission.

The stipulation was included in documents sent to planners at Lambeth – one of the two planning authorities which gave it the green light last year. It said: “All groups of 8 or more visitors would be required to contact the Garden Bridge Trust to request a formal visit to the bridge. This policy would not only assist visitor management but also would discourage protest groups from trying to access the bridge.”

It was also revealed the bridge will be closed for 12 days a year for fundraising and community events which the trust said revenue raised from these events would go towards its upkeep. The bridge will close its doors for six hours a day as well, opening between 6am and midnight. And cyclists have been told they will not be allowed to ride their bikes across it.

In November, St Pauls’s wrote to Westminster council – the other planning authority involved in the scheme – to raise concerns claiming it will ruin views of the cathedral from the South Bank while a number of charities, including the RSPB, have said promises about the benefits of the bridge’s green space cannot be justified and the public money pledged to the scheme – more than £60 million – would be better spent elsewhere.

Last month, it emerged that London mayor Boris Johnson – who is backing the scheme and has been lobbied hard to do so by bridge supporter, actress Joanna Lumley – said taxpayers would step in and bail out the bridge if it couldn’t find the £3.5 million needed for its annual maintenance costs. The pledge was made after Johnson had previously promised that taxpayers would not be asked to foot the bill for its upkeep. 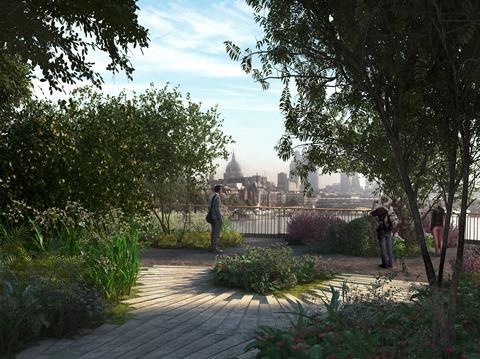 Now the Garden Bridge Trust has produced a fact versus fiction cribsheet which it says will “correct” some of “the views of a small number of campaigners opposed to the scheme. Among their comments have been a number of factual inaccuracies about the project which it is important to correct.”

The trust said the scheme “highlights Britain’s innovation and creativity…offering people the chance to get involved in gardening and horticulture”.

In response to claims the bridge costs too much and the public will have to pick up the cost, it says two-thirds of the its cost will be bankrolled by the private sector “and there is a business plan to cover the £3.5 million annual maintenance and operations costs”. It added the bridge will be free to visit “and closures will be an exception”.

And on claims that groups of eight will be banned, it says: “Groups of 8 or more are NOT (sic) banned. They will be welcome and there will be staff on hand to help look after visitors and safely manage numbers. Larger groups of organised tours will be encouraged to contact staff in advance, so they can get advice on the best times to visit and how to plan their trip.”

The trust says the bridge is expected to attract 7.1 million visitors a year with peak crowds of 30,000 on a Saturday and the busiest period slated to be between 5 and 6pm when 5,000 people will visit. Weekday peaks are expected to be 27,000 visitors.

It disputed claims the bridge is in the wrong location and says that “it will benefit the health and wellbeing of local communities and visitors alike” and adds: “The location will improve transport connectivity, efficiency and resilience on both side of the river Thames.”

The bridge is being challenged in the High Court by a local resident who claims Lambeth gave it permission when it shouldn’t have.

Michael Ball argues the local authority failed to comply with its duty to protect the settings of listed buildings in the area and that the long-term funding arrangements for the operation and maintenance of the bridge have not been properly considered. A decision is due by the end of June.