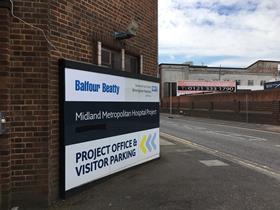 Work to finish the construction of the Midland Metropolitan hospital left stranded by Carillion’s collapse will now be able to go ahead, after chancellor Sajid Javid confirmed the government would stump up £350m to rescue the project.

The announcement marks the formal sign-off by the government of the trust’s business case for completion of the hospital, which it had hoped would be rubber stamped over the summer.

This funding will allow the Sandwell and West Birmingham Hospitals NHS trust to sign a final contract with Balfour Beatty, who it announced as the preferred replacement main contractor earlier this year.

The pair are expected to sign a contract in the coming weeks.

The project is expected to be completed in April 2022 , meaning it will be open in time for the 2022 Birmingham Commonwealth Games – a target date the trust has been eyeing since earlier this year.

The trust behind the other hospital left in limbo by Carillion's collapse, the Royal Liverpool hospital, is still waiting for government sign off on their plan to complete the project.