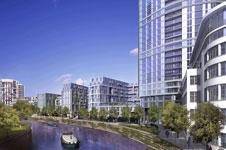 Housing targets being kept under constant review, according to government official

Housing targets in the Thames Gateway are being kept under "constant review", the civil servant in charge of the scheme said this morning.

Joe Montgomery, director general of regions and communities at the Department for Communities and Local Government, denied that ministers were about to renege on plans to build 160,000 homes in the Thames Gateway by 2016, a region that stretches from east London in to north Kent and south Essex.

Montgomery, speaking at the Thames Gateway Forum in east London, admitted that the pace of housebuilding had been put under pressure in the Gateway by the downturn in the economy. He said: "We don't know what the build rate will be for scheme, and what the mix of schemes will be. It may be that the phasing of schemes [in terms of affordable housing] will be different. We need to look at it scheme by scheme.

"We are not, though, reneging on our targets. I think constant review of the targets is the name of the game here."

Montgomery also said that the appointment of architect Terry Farrell to conduct a review of the future economic, social and environmental vision for the Thames Gateway over the next year was not a sign that the targets would be changed.