Grayling pledges work on Transpennine upgrade to start next year 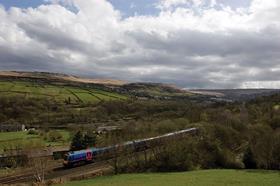 Transport secretary Chris Grayling has committed to transport improvements across the country, with both the Transpennine route and Crossrail 2 taking major steps forward.

Grayling said government’s transport improvements would advance at the same time across the UK.

Speaking at the Transport for the Northern Powerhouse conference, Grayling said he expected a £3bn programme of upgrades to the Transpennine route to begin from spring 2019, while an Independent Affordability Review is established to look into the cost of Crossrail 2.

Grayling said while work is already underway on the key route between Manchester, Leeds and York, he expected Network Rail to shortly begin investing the £3bn into a rolling programme of works.

Grayling said: “I want to realise passenger benefits from the £3bn we have ring-fenced for the Pennine route as fast as possible.

“Network Rail has already begun detailed designs, and provided us with options for the Transpennine Route Upgrade to meet the objectives we’ve set out. That – in turn – has given us an opportunity to undertake the work in phases starting as soon as spring next year.”

Grayling also said he would work with local authorities along the Transpennine route to discuss how to maximise the benefits of the £3bn investment, such as creating new stations to increase access to the railway and finding opportunities for housing development.

The transport secretary also spoke about an Independent Affordability Review into Crossrail 2, which has been commissioned jointly by the Department for Transport and Transport for London.

The review, which is expected to finish this summer, will be lead by the former managing director of Thames Tideway Tunnel Mike Gerrard.

The report will focus on the affordability of the project and how to ensure that those who stand to benefit from new infrastructure contribute to funding it.

Gerrard said: “Crossrail 2 has the potential to relieve congestion and unlock housing, jobs and development to support future growth in London, but it is imperative that it can be delivered in an affordable way that is fair to both the London public and the wider UK taxpayer.

“Major projects work best when independent reviews, drawing on a wealth of experience, help move them from plans to spades in the ground. I am delighted to chair this crucial review and I look forward to working with the Department for Transport and Transport for London to ensure that Crossrail 2 is the best project it can be.”

Last week leaders from the North of England petitioned government to commit to delivering the Northern Powerhouse Rail (NPR) in tandem with HS2.

The Northern Powerhouse Partnership, a thinktank set up by former chancellor George Osborne, wants the NPR, which aims to improve east-west connections across the North of England, to be delivered alongside phase 2b of HS2 in 2032/33.