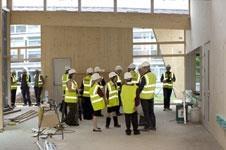 Twelve school building schemes worth £1bn have been given the green light by the government today.

The 12 projects, part of the Building Schools for the Future programme, have been given permission to proceed by the government and delivery agency Partnerships for Schools. The schemes will be procured between January and March next year.

The projects include 10 authorities new to BSF: Brent, Darlington, Devon, Havering, Kingston and Croydon, Norfolk, Plymouth, Sefton , Wakefield and Warrington. In addition, Lancashire and Tameside, both of which are already in the programme, have received approval for the next phase of their projects.

The move sees twice the number of schemes originally expected to be approved this month given the go-ahead, and will provide a welcome boost to work for the construction industry at a time when public spending is expected to slow in the run up to the next election.

The authorities were selected from 20 applicants, and Byles said he would continue to push for more schemes to go ahead “as soon as is practicable.”

Partnerships for Schools also confirmed funding for three local authorities to progress plans for delivery of schemes under the Primary Capital Programme. These are: Hammersmith and Fulham, Leicestershire and Medway.