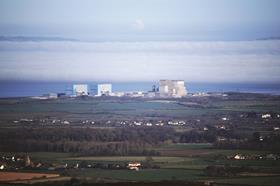 A £50m temporary wharf that will play a key role in the construction of the new nuclear power plant at Hinkley Point has been given planning permission.

The Marine Management Organisation (MMO) said it had approved three applications relating to the development of a jetty at Hinkley Point, Somerset, from NNB Generation Company, a subsidiary of EDF Energy.

The MMO said it had approved the construction of a harbour made up of a jetty and some terrestrial work as well as the dredging of material alongside the jetty.

The jetty is critical to the construction of the first nuclear power plant in the UK in decades as it will take delivery of the construction materials for the power station, reducing the amount of lorry loads to and from the site.

EDF is currently in a battle with local councils over the number of lorries that will be allowed use local roads during the £14bn construction project.

As Building revealed in March, contractors Costain, Sir Robert McAlpine, Dean & Dyball, Kier, BAM and Volker Stevin are on the shortlist for the £50m job to build the jetty, with work due to start in 2013.

EDF will make a final investment decision on the power plant as a whole, including the wharf, later this year.

Last month a consortium of Laing O’Rourke and Bouygues won the £2bn civils job to build the first of two nuclear power stations at Hinkley Point for EDF.