Scheme will require demolition of 1930s building within conservation area

Feilden Clegg Bradley Studios has been given the green light for proposals to demolish a 1930s office building in a conservation area in Fulham and replace it with an office block.

The four-storey west London scheme is planned for Imperial Road close to the Stamford Bridge home of Premier League football side Chelsea. 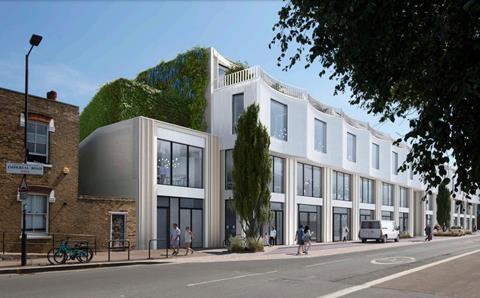 Work will involve flattening the existing row of commercial units, originally built in 1935 as a garage for the Imperial Gas Light and Coke Company.

The new proposal features an art deco aesthetic, with white cladding, large windows and a repeating scalloped facade on the third storey.

The site is located within the Imperial Square and Gas Works conservation area, which was formerly the site of a major gas works district first established in 1823.

It is bounded to the rear by Imperial Square, an 1870s housing development built for workers and pensioners of the gas works.

It is in immediate proximity to the Fulham Gasworks site, which has been given outline planning permission for a major mixed-use development featuring more than 1,800 homes and a trio of Pilbrow & Partners-designed buildings up to 37-storeys in height.