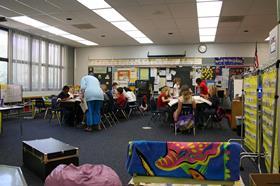 Almost half of schools districts in England will have more primary pupils than places within two years, the Local Government Association (LGA) has said.

In a report on primary school places, the LGA said some local areas will face a 20% shortfall in places by 2015.

The LGA’s analysis of 2012 local authority data on school-place needs indicated about 1,000 of the 2,277 local school planning districts will be over-capacity by 2015-16.

The greatest pressure is focused in 99 districts, where 20% more pupils are predicted than places.

Overall, two thirds of local authorities are predicting they will have more pupils than places by the beginning of the 2016 academic year.

Some 40 local councils are predicted to be 10% over capacity, with 15 of those predicting a 20% surplus of pupils over places.

The squeeze has been attributed to the rising birth rate and to immigration.

The LGA’s warning comes as the government opens 93 free schools, raising the total to 174 and providing 43,000 new school places.

The LGA is calling for the Department for Education (DfE) to work more closely with local councils, so planning for emerging demand can be better managed.

He said that with free schools and academies approved directly by the DfE this can limit councils ability to plan strategically.

Simmonds said free schools were “a pretty small part of the overall picture”.

“We need to make sure that money comes through the local authority who are often ready with their shovels and diggers to get work under way immediately.”

Education secretary Michael Gove said: “We have more than doubled funding for new school places and we are also setting up great new free schools, which are giving parents a choice of high quality school places in areas Labour neglected.”

But shadow education secretary Stephen Twigg blamed the lack of places on the government’s free schools policy: “In choosing to prioritise school capital funding in areas with surplus places through his free schools programme, David Cameron is showing he is out of touch with the needs of ordinary people by failing to meet basic need for school places.”

Natalie Evans, of the New Schools Network, which champions free schools, said: “In addition to creating choice for parents who are not happy with the standard of what is currently available locally, Free Schools are playing an important role in helping address the overall shortfall of school places.”