Housing quango misses targets despite them being adjusted for covid-19

Homes England missed four out of its six housebuilding targets in the year to March 2021, despite targets have been revised down sharply to reflect the impact of the coronavirus pandemic.

Recently published accounts for the government’s housing quango show it directly supported construction of 35,183 homes, 7% fewer homes than its amended target, and saw the number of affordable homes completed drop to just 24,245, missing its adjusted target by 12%.

The agency, which oversees housing ministry spend of more than £5bn per annum, administers the government’s affordable housebuilding programme, a series of other housebuilding support schemes, and the Help to Buy programme.

The government had originally intended for the body, which saw its chief executive Nick Walkley (pictured, left) leave unexpectedly in January, to oversee a significant ramping up of production in the 2020/21 financial year, but quickly dialled down expectations in the light of the covid-19 crisis, which temporarily shut the vast majority of housebuilding sites.

In addition, the agency missed both original and revised targets for production of directly supported new homes which were additional to the market, and for the amount of housing capacity its actions unlocked.

However, with the rebound in the private sale market from June onwards, Homes England did manage to beat both its original and revised target for starts, recording 37,224 starts. It also beat its revised target for the overall number of households supported into home ownership, by 44%

The accounts said that the first three months of the financial year saw “many partners request deferrals and extensions” as the market temporarily closed, leading it to reset expectations at the end of the first quarter. This saw the body’s initially “stretching” targets reduced by between 18-32%. 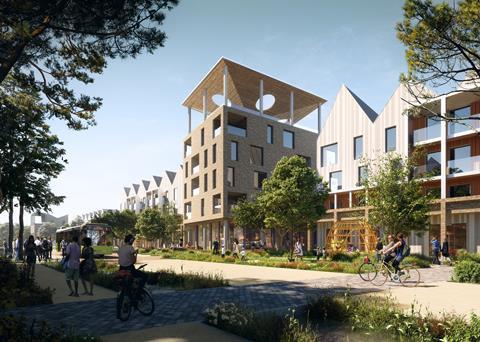 The report said: “Whilst housing transactions have bounced back, a significant proportion of our completions are delivered through the Affordable Homes Programme, which is less influenced by consumer demand and has seen a significant drop in housing completions, impacting overall results.”

The body, which in June announced the appointment of Peter Denton as its next chief executive, registered net spend of £5.7bn in the year, a rise on the £5.4bn spent the previous year.

A spokesperson for Homes England said: “The performance of Homes England was in line with market trends which saw a 13% year-on-year decline. Whilst completions were down overall, those delivered through the private sector were strong due to a buoyant market.

“However, most of our planned completions are delivered by the affordable housing sector which still faces challenges in a post-pandemic world. We will continue supporting housebuilders to overcome these hurdles to build the new homes the country needs.”