TBMs being made in Germany

HS2 has today launched a national vote to pick the names of the first of 10 tunnel boring machines that will excavate more than 35 miles of tunnel on the first phase of the railway.

The public is being invited to vote for their favourite name, from a shortlist of three chosen by local schoolchildren and inspired by female scientific and medical pioneers. 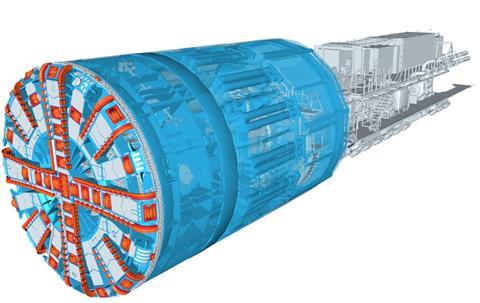 The 3D model of the boring machine

The name with the most votes will be given to the first TBM, due to be launched from a site close to the M25 next spring. The 2,000 tonne, 170m long machine will be one of two that will dig the 10 mile long Chiltern tunnels.

The second machine, due to be launched a month later, will be given the second most popular name in the public vote.

The TBMs will be operated by HS2’s main works contractor, Align JV – a joint venture formed of Bouygues, Sir Robert McAlpine and VolkerFitzpatrick.

Speaking to Building, David Eve, Align’s head of community engagement and a civil engineer by trade, said the variable density TBMs will be the first of their kind to be used in the UK.

He said: “They are a unique design within the UK as they can deal with varying geology very well. They can adapt and use high and low pressure without changing methodology or parts as it goes along.”

The machines are being built by German construction equipment manufacturer Herrenknecht. Their names are being chosen now so they can be fixed to machines during their manufacture, ready for when they emerge out of the factory.

Eve said the manufacture of the two machines is still on track despite the covid-19 pandemic but due to Herrenknecht’s location at Schwanau near the border with France, which went into lockdown for eight weeks, some staff living on the French side had been unable to make it into work.

After completion, the first two machines will be taken apart before being shipped to the UK and arriving here in October.

Together the TBMs will spend around three years digging what will be the longest and deepest tunnels on the project, stretching from just inside the M25, to South Heath in Buckinghamshire.

The material removed from the tunnels as they are bored will be spread across land between junctions 17 and 18 of the M25.