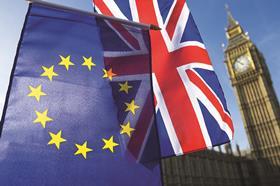 One in three firms are already feeling the impact of Brexit, creating an urgent need for industry and government to collaborate on Brexit-related skills challenges, according to new research from the Construction Industry Training Board.

The CITB’s new green paper, which updates the 2017 migration research - Research into Migration in the UK Construction and Built Environment Sector - found while a growing number of employers were feeling the effects of Brexit, like staff shortages and a fewer clients, less than a third had taken action as it approaches, or were even plan on doing so.

Steve Radley, policy director at CITB, told Building many firms were banking on using the two-year transition period to come up with a new recruitment plan, with 60% of firms that employ 100 or more people saying the transition period was extremely important.

Radley said: “With Brexit approaching, construction employers are expecting the recruitment of skilled workers to get harder as they anticipate restrictions on access to migrant workers. However, few employers are making firm plans to address this and instead are focusing on retaining their existing migrant workforce.

“This Green Paper highlights the need for a twin-track strategy - investing in the domestic workforce while enabling employers to continue to secure the vital talent of migrant workers. With an estimated 158,000 construction jobs to be created between now and 2022, it is critical that industry works together to deliver its part of this strategy.”

The one in three construction employers who are feeling the impact of Brexit, is a nine percentage-point increase from last year, while almost half expected recruitment of skilled workers to become more difficult over the next two years.

Radley said employers who were interviewed were counting on the industry’s resilience to get it through Brexit.

He said: “Firms we interviewed were saying we have faced one crisis after another and this is just going to be another one. On one hand this is quite positive as it shows the resilience of the industry, we are a little concerned. We are saying it’s time to take a real look at exactly how we are going to manage it.

Radley also said, given the age profile of non-UK workers in the construction industry is significantly younger than that of UK workers, it was important industry looked at both attracting the next generation of local workers but also retraining to extend the working life of older workers.