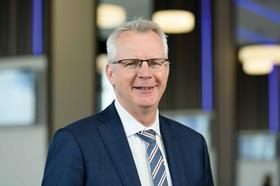 The boss of Interserve’s construction business has said it expects to have wrapped up its work completing its disastrous energy-from-waste (EfW) contracts by the end of this year.

The firm has racked up losses of £215m on the initiative which began in July 2012 with the firm winning a £146m contract to build a plant in Glasgow which kicked off a slew of jobs across the country.

But Interserve said it was pulling out of the market 18 months ago after running up crippling losses on the Glasgow job.

The managing director of its UK construction business Gordon Kew told Building: “The whole energy-from-waste portfolio we expect to be out of this year.”

The scale of the losses forced it into separating out its exited business under Ian Renhard, Kew’s predecessor, who has taken charge of EfW jobs reporting directly to main board director Dougie Sutherland.

Kew, who became managing director in October 2016, said: “Having it as a separate business allowed me to run the rest of the [construction] business unencumbered.”

The firm has completed work on all six of its schemes – including Glasgow which it was removed from at the end of 2016 – apart from its job at Dunbar in Scotland.

It is on site carrying out commissioning work at plants in Derby, Margam, south Wales, and Rotherham, South Yorkshire.

But Kew said the firm came unstuck when it agreed to carry out complex process engineering work at Derby and Glasgow where Interserve took on responsibilty for making sure the plants produced their stated MW output. “There was definitely a capability gap,” Kew admitted.

“We went into a new sector that we’d thought we’d prepared for and clearly we hadn’t.”

And he said the firm won too many jobs. “Our order book got full very quickly. It’s been a sobering experience. [Energy-from-waste] forced a refinancing and it’s a major catalyst as to why we had to undergo restructure of the business.”

Pennon, the parent company of Interserve’s Glasgow client, Viridor, said in March it was in discussions with Interserve “with regard to the contractual settlement” but Kew said: “We don’t concur with their view of life and it’s a position we’re entirely comfortable with.”

Interserve’s UK construction business posted revenues of just over £1bn last year but Kew said he expected income to be “slightly down” this year. The firm’s largest current job is a £200m scheme to build a new facility at the Defence and National Rehabilitation Centre at Loughborough.

he firm’s largest current job is a £200m scheme to build a new facility at the Defence and National Rehabilitation Centre at Loughborough.