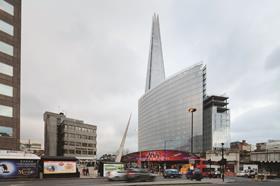 ISG has won the prestigious £50m job to fit out the ‘Baby Shard’ at London Bridge Quarter for Rupert Murdoch’s News UK.

According to two sources close to the job, ISG has seen off rival bids from Mace subsidiary Como and Morgan Sindall subsidiary Overbury.

Building revealed earlier this month that the three firms had been shortlisted for the job.

The job is understood to be worth £40m-£50m and the fit-out programme should complete in late 2014.

News UK confirmed in July it intends to occupy the whole of the 428,000ft2, 17-storey The Place building (pictured). Like the Shard, it was designed by Renzo Piano, developed by Sellar, and constructed by Mace.

News UK is moving all its London-based subsidiaries into one building for the first time, including newspapers The Times, The Sun and The Sunday Times, news agency Dow Jones and book publisher HarperCollins.

The move will sever Murdoch’s ties with Wapping, where his newspapers have been based since 1986. News UK’s newspapers are currently based in Wapping’s Thomas More Square, after they moved three years ago from long-standing former home Fortress Wapping, which was sold to Berkeley last year and will be redeveloped into 1,800 homes.

News UK said: “We wouldn’t comment when the tender process is still ongoing.”