Keller chief to step down 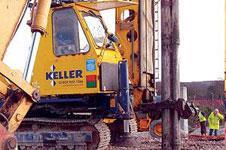 Keller chief executive Justin Atkinson is to step down from the role at the end of 2015, the firm announced this morning.

In a statement to the City this morning specialist contractor Keller said it had already initiated the search for a replacement.

Atkinson said the expansion of the group overseas had required large periods of travel which he could “no longer commit to”.

He said: “Since I joined Keller in 1990, the group has grown significantly, especially in international markets with the group now working in over 40 countries.

“Particularly during recent years, this has meant an ever increasing amount of overseas travel, which is not something I can continue to commit to.

“I have therefore informed the board of my intention to retire from Keller at the end of 2015, when I will be 55.

“In the meantime, I shall continue to work diligently with the Executive team to deliver the group strategy.”

Roy Franklin, chair of Keller, said Atkins on was a “highly effective chief executive” who had grown total shareholder return by 17% in the ten years since he took up the role.

He added: “The timing of this decision provides Keller with continuity of leadership and the necessary time to search for and appoint his successor in an orderly handover.”