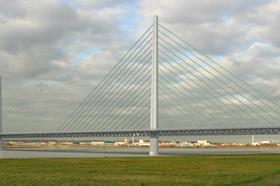 A consortium including contractors Kier and FCC has been confirmed as the winner of the competition to build the £600m Mersey Gateway project.

The firms will build a six-lane bridge suspended from three towers across the Mersey river between Runcorn and Widnes and complete associated works in the two towns.

As Building revealed last month, Kier and FCC were tipped to beat rivals consortiums to the contract.

The firms are due to start site clearance and demolition later this year.

Chris Rhead, project director for the Merseylink consortium, said he was confident the project would be delivered “to schedule and budget, with the least possible disruption to the local community”.

The winning team will  retain the three-tower design but plans to use a reinforced concrete deck cast in-situ, rather than the original design based on steel fabrication, which the client Mersey Gateway said would lead to “tens of millions” of pounds of savings over the original design.

Steve Nicholson, Mersey Gateway’s project director, said: “The outcome of procurement demonstrates the value in allowing private sector to modify the design in order to reduce costs. The quality of all the bids we received and the work put in by all the shortlisted bidders has been of a very high standard, and each one satisfied our challenging requirements.”

The project is part funded by the Department for Transport and is due to receive a planning decision later this year.

The three consortia bidding for the Mersey Gateway Project were: