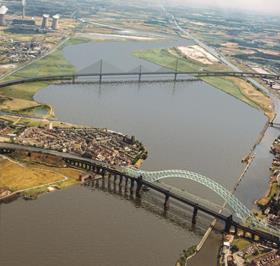 A team comprising Kier and FCC has emerged as the favourite for the £600m Mersey Gateway bridge project, Building understands.

The Merseylink consortium is understood to have beaten two rival consortiums to the contract to design, build, finance and operate the new £589m six-lane toll bridge planned to cross the River Mersey.

A preferred bidder will be announced in June with construction set to start in late 2013 or early 2014.

A spokesperson for the project said: “The procurement process is progressing well and is still ongoing. We have had very productive discussions with all three shortlisted bidders and are confident we will be able to make a formal announcement about the appointment of a preferred bidder in June 2013. We will not be giving any further updates on progress until this point.”

The three consortia bidding for the Mersey Gateway Project were: