Kier picks up £50m civils deal for next phase of HS2

HS2 has confirmed that Kier will be appointed to a £50m programme of highways and utility work on the next phase of the project.

Known as enabling civils works – package 2 (ECW2), the job will be awarded in two stages and includes a range of early works designed to reduce disruption during the main build stage of the project.

This includes major highways works and associated utility diversions as well as a environmental and other surveys along the 36 mile stretch of the route that will be known as phase 2a.

The second stage of the work will be awarded in 2022.

Phase 2a of the scheme will take the high speed railway north of the West Midlands, and on to destinations such as Glasgow, Liverpool, Manchester and other parts of the North-west. It will initially stop at Crewe.

The contract award follows the start of procurement for the design and delivery partner for 2a last month and the award of the early environmental works contract earlier this year, with Balfour Beatty picked for the £52m deal. 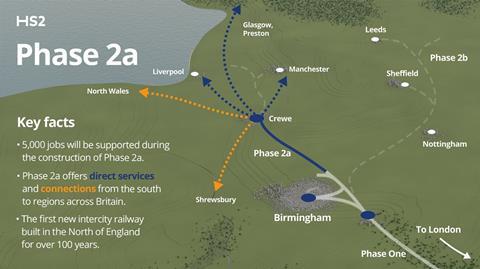