Kingspan was not dishonest about its test data for a flammable insulation product which was used for the refurbishment of Grenfell Tower, a former technical advisor at the firm has told the inquiry.

Gareth Mills, who worked at Kingspan between 2003 and 2014, told Wednesday’s hearing that his former employer had been seeking to “maximise what scope they could get on approvals” for its K15 Kooltherm insulation – but he was not aware that the firm had “at any stage” been dishonest about the testing which was used to prove to clients that it was safe. 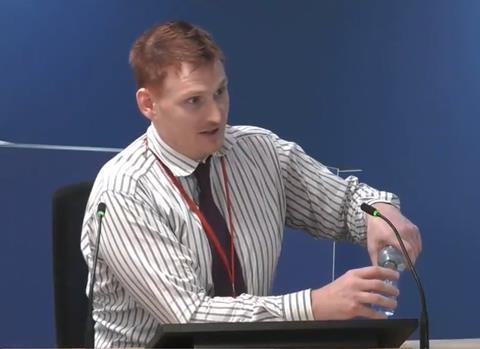 The inquiry has already heard how Kingspan had changed the chemical composition of its K15 product a year after it had passed a 2005 fire test but had continued to use the test results from the older version of the product to market the newer version as safe for use on buildings above 18m.

In a letter sent to the Building Research Establishment (BRE) last month, Kingspan said it was “now of the view” that the product it had been selling to the market since 2006 was different to what had been tested.

But former Kingspan technical product manager Ivor Meredith told Monday’s hearing that it had been “common knowledge” at the firm that the newer K15 had been using outdated test data.

The inquiry has already heard that the newer K15, which Kingspan had been selling for over 14 years before it withdrew its test data last month, had turned a 2007 test rig into a “raging inferno” that had to be extinguished out of fears that it would endanger the testing laboratory.

Yesterday’s hearing was told how Kingspan had been “attempting to avoid” any mention in a certificate issued by approvals body the British Board of Agrement (BBA) that K15 could only be installed above 18m if it used the specific system tested in 2005.

Inquiry barrister Kate Grange QC asked Mills: “Would you accept now that there was a culture at Kingspan of trying to minimise the limitations on K15, rather than being transparent and accurate with its customers and with organisations like the BBA?”

Mills replied: “I would say, yes, they did want to maximise, you know, what scope they could get on approvals and things like that. I don’t think at any stage they were sort of dishonest about what test data they had; or not that I was aware of, anyway.”

In an email sent to Mills from technical manager Philip Heath in July 2008 on potential revisions to the draft of a BBA report on K15, Heath suggested replacing the word “blockwork” – referring to the substrate material which the insulation had been attached to in the 2005 test – with “non combustible”, adding that it “might allow us to use a little spin in future”.

Mills was asked by Grange if he was aware at the time that, even without the relevant test data, “there was a deliberate marketing strategy being pursued by Kingspan to widen the scope of this certificate and other certificates?”

Mills replied: “I suppose they did want things to be as general as possible, yeah.”

“But did it ever occur to you that this was a matter of life safety?”, Grange asked. Mills replied: “I don’t propose to be an expert and know exactly how much effect certain details have.”

Grange asked: “But you must have been aware that there were potential health and safety consequences as to whether or not this product was used in tall buildings, including tall residential buildings?”

Mills said: “Um, yeah, I knew there was a requirement to follow regulations, yeah.” Grange replied: “And what underpins those regulations is life safety isn’t it?” Mills answered: “Um, yeah I assume that’s probably something that’s involved when they’re writing them, yes.”

But Mills did admit he thought there was “a possibility” that the marketing material for K15 had been misleading when inquiry chairman Martin Moore-Bick intervened when Mills was asked about a certificate for K15 obtained from the Local Authority Building Control which stated wrongly that the insulation was a “material of limited combustibility”.

Moore-Bick asked Mills: “It didn’t trouble you that it was misleading?” Mills replied: “Yeah, maybe that was a … you know, a little bit of a jump perhaps.” When pressed further by Moore-Bick, Mills said: “It didn’t mislead me, no.”

But Moore-Bick continued: “No, no, that’s not the question I asked,” he said, adding: “Did you think it was misleading…in the sense that it was liable to mislead someone who didn’t have the same degree of technical knowledge that you had?” Mills replied: “It’s a possibility, looking back, yeah.”

The first phase of the inquiry into the fire which killed 72 people in June 2017 found that the refurbishment’s ACM cladding was the primary cause of the fire’s spread.