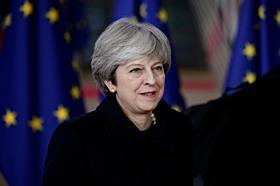 A Building survey has revealed that a large number of firms are doing little if anything at all about the threat of a no-deal Brexit.

The UK is due to leave the EU on 29 March and next week MPs will vote on Theresa May’s Brexit deal.

But the spectre of leaving the EU in less than 12 weeks’ time without a deal does not seem to have alarmed firms, with more than 55% saying they had not engaged in any scenario planning to test the impact of no deal, and around half (49%) saying they did not have any strategies ready in the event of that happening.

And even larger proportions admit to having taken no specific actions. More than half (57%) of respondents who said they work in the EU have no plan to ensure they are still able to work there following a no-deal Brexit.

Just 15% of respondents said their firms were “very prepared” for a no-deal exit.

Sarah McMonagle, director of external affairs for the Federation of Master Builders, which represents small and medium-sized building firms, said: “I can almost guarantee our members have not been preparing for a no-deal. They live month to month. The bigger firms might be able to stockpile but there’s very little SMEs can do.”

Gleeds chair Richard Steer said firms were going to have start contingency planning: “The view has been that at the end of the day some kind of fudge will be found and there won’t be a cliff edge. But I think planning will have to start with a bit more alacrity now.”

But some have flagged up the costs of contingency planning and Vince Clancy, chief executive of Turner & Townsend, warned: “It just means [they] will get pushed down the supply chain.”