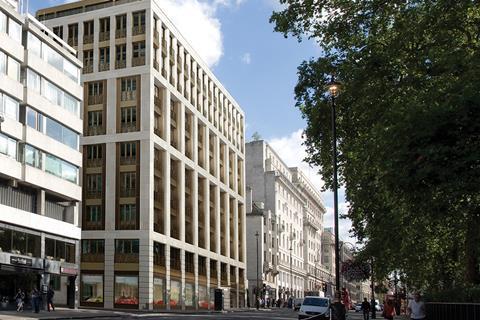 Laing O’Rourke is being lined up to build British Land’s prestigious £318m Clarges Estate development in Mayfair, Building can reveal.

Although a contract has yet to be signed, Building understands the firm is now in “detailed discussions” with British Land about the mixed-use scheme, which is located on Piccadilly and overlooks Green Park, ahead of its expected appointment to the project.

The 193,500ft2 Squire & Partners-designed scheme will replace the current sixties office block and includes 94,000ft2 of residential space and 47,500ft2 of office space.

The site, which is next to department store Fortnum and Mason, was bought by British land for £130m in 2012.

The redevelopment involves the demolition of the existing block and the construction of four new buildings, including a 10-storey residential building, a commercial office building as well as a new bespoke building for the headquarters of the Kennel Club and a new building of affordable housing on Clarges Street.

The project will also create a new mews street between the residential and office buildings.

The scheme was granted planning permission by Westminster council last month, despite concerns that it did not include enough affordable housing.

Of the 47 apartments, only 11 will be affordable – less than the 30% share required by Westminster council’s development plan.

Davis Langdon is quantity surveyor on the project, DP9 is planning consultant and the project manager is GVA Second London Wall.

Construction on the project is anticipated to start later this year or in early 2014.