Insurance giant and modular housing pioneer Legal & General (L&G) will not use timber as a structural material for its planned modular apartments, the company has said.

L&G, which has invested more than £50m in its modular housing business since its foundation in 2015, launched with the idea of basing its homes on cross-laminated timber (CLT) technology. It has yet to deliver homes at the scale originally envisaged, however. 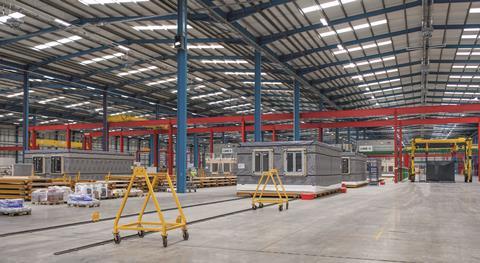 The business is now at prototype stage for a modular apartment product based on a hybrid of concrete and steel frame.

Using these materials, L&G would not fall foul of the post‑Grenfell ban on combustible products in external walls for tall buildings, which was introduced by the government last year.

But a spokesperson for L&G Modular Homes said the firm was sticking with CLT for its whole-house products. She said: “As we design each product we evaluate the various material systems available and choose the system that performs best for the customer requirements, design type and regulatory requirements.

“We have chosen CLT for our two and three-bedroom homes and are very happy with its performance. We have chosen a combination of concrete and steel for apartments as we believe this is the most effective way to meet the requirements for this product.”

>> Also read: L&G signs £4bn deal with Oxford uni
>> Analysis: How is the CLT industry responding to the combustibles ban?

The spokesperson did not comment on whether the move had been prompted by the government’s ban, which rules out any combustible materials in the external walls of buildings of 18m or higher, equivalent to about six storeys.

Several architects and CLT specialists have voiced fears that the rules could damage the structural timber industry, despite these products commonly performing well in fires.

L&G set up a 550,000ft² factory in 2016 with the capacity to build 3,500 homes a year in Sherburn-in-Elmet, near Leeds, and originally said the first homes would be rolling off the production line by June that year.

Three years on, the factory has mainly produced house prototypes, although it did deliver eight homes for Silva Homes in Berkshire. It is not known how many customers L&G has for its homes products or the apartments it is now developing.

According to accounts filed at Companies House, the business has reported losses of £76m in the three financial years since it was set up, including a £28m write-down in 2017 of the value of the firm’s “fixed assets”.

Last year, L&G said the firm had encountered manufacturing “constraints”, which had taken longer to rectify than anticipated, including around the availability of CLT, since L&G could not get CLT boards supplied that were of the correct tolerances.

In June 2017 L&G changed leadership at the business, bringing in former Rolls Royce executive Rosie Toogood to be the L&G modular’s chief executive.