The project is expected to complete in 2021 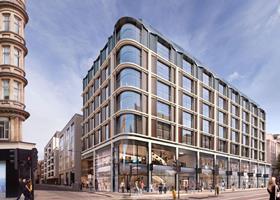 Lendlease has been named as the main contractor for Great Portland Estates’ £59m Oxford House development.

In its half-year financial results the developer said the Australian contractor had secured the main contractor gig on the Orms-designed scheme.

Great Portland Estates (GPE) obtained vacant possession in May and Erith has since begun demolition work on the project, which is due to wrap up in the third quarter of 2021.

The new building (pictured) will deliver 78,100ft2 of new offices and 37,900ft2 of retail space directly opposite the Dean Street entrance to the Tottenham Court Road Crossrail station.

The developer said it was expecting profit on cost of 17.9% and that “early occupier interest for the retail element of the scheme is good”.

In its half-year results, which the developer published yesterday, GPE revealed its profit had jumped by 77% in the six months to 30 September.

The company bagged £40m of profit in the first half, compared to £23m year-on-year, while its first half turnover fell 22% to £51m compared with the same period last year.