Scheme will sit across from the new Whitechapel Crossrail station 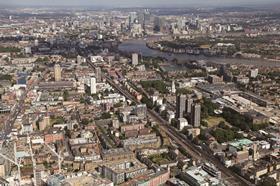 Ellmer Construction is tipped to win the contract to build a Great Portland Estates office block in east London, as the developer targets less central parts of the capital.

The FTSE 250 developer has traditionally focused on the West End and the centre of the capital, where its projects have included Make’s Rathbone Square scheme built by Lendlease and AHMM’s 240 Blackfriars, built by Mace.

It is on site with two other schemes in the West End, a £59m deal on Oxford Street by architect Orms to revamp a 1950s building called Oxford House, where Erith has begun demolition work, while Mace has started on the £150m Hanover Square mixed-use scheme on the junction of New Bond Street and Brook Street, which incorporates the eastern entrance to the Crossrail station at New Bond Street.

But Great Portland Estates (GPE) is now looking east and is set to ink a deal for an unknown sum with Byrne Group-owned Ellmer to carry out work on the seven-storey building, once JF Hunt has completed enabling works.

Designed by DSDHA, the scheme, called Cityside House, is the farthest east GPE has ventured and sits close to Whitechapel’s Crossrail station.

It is due to complete at the end of 2019 and will include flexible working space and smart building technology as part GPE’s decision to appeal to clients from the digital and technology sectors.

Whitechapel has become a popular area for the finance and tech sectors and is expected to become even more in demand once the Crossrail station there opens in December this year.

Wates recently completed a mixed-use scheme for GPE at 160 Old Street, close to the tech hub at Old Street roundabout. Four floors of the development are now let to Turner Broadcasting, the owner of news channel CNN.