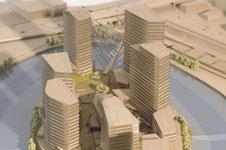 The hublights of the second week of the London Festival of Architecture in Canary Wharf, Stratford and the Greenwich Peninsula

After last weekend’s extravaganza on Exhibition Road, you could be forgiven for thinking the LFA is over. But fear not, for East London is keen to get in on the act with a week of events, talks and displays. Here are our five hub highlights for Canary Wharf, Stratford and the Greenwich Peninsula, plus five going on elsewhere in the capital. Don’t forget you can get a full list of what’s going on at www.lfa2008.org.

27 June
It’s not too late to get tickets for a talk by Cesar Pelli, the architect behind One Canada Square, London’s tallest building and a towering symbol for the regeneration of the capital’s docklands. The Argentine architect will be celebrating his most famous building’s 20th anniversary.
Where? East Winter Garden, E14
When? 7 – 9pm

Get on a boat

28 – 29 June
If you fancy a tour of London’s docklands as they were originally meant to be viewed, grab a ride on the festival’s bespoke boat shuttle service, which will be ferrying visitors between Greenwich Peninsula and Trinity Buoy Wharf all weekend. Organised by Urban Space Management
Where? Catch it at the QEII pier by the O2 centre.
When? 12 – 6pm, departures at various times.

Listen to a house sing

28 June – 20 July
An exhibition, installation and performance piece – yes, all three – exploring the role of chimneys in the East of London and beyond. Organised by Spark.
Where? Trinity Buoy Wharf
When? All day.

Sit out on the porch

27-29 June
As it’s going to be nice weather this weekend, why not sit out on the porch? If you can find it, that is. Public Works have promised us a “mini-architectural toy”, or a mobile garden space that will roam the entire hub all weekend.
Where? Reuters Plaza, Canary Wharf
When? 11am – 5pm

28 June
Providing they’re not bankrupted by the Olympic Village – joke, joke – Lend Lease and JV partner Quintain will be building an enormous scheme at the foot of Lord Rogers’ Millennium Dome. Check out the designs by architects such as Terry Farrell, Foreign Office Architects, FLACQ and Jestico + Whiles.
Where? 1 Green Place, Greenwich Peninsula
When? 11 – 5pm

Highlights this week elsewhere at the Festival include:

Keep next weekend free for the activities of the next featured hub – King’s Cross, Bloomsbury, Fitzrovia and Covent Garden.