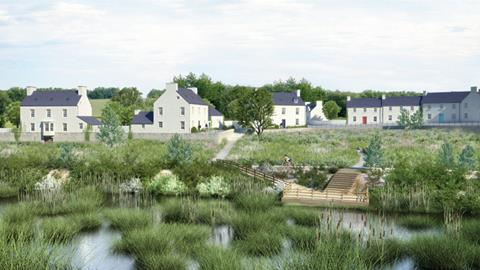 Natural Building Technologies’ ThermoPlan wall system has been selected by regeneration specialist St Modwen in consultation with the Prince’s Foundation for Building Community to construct eight exemplar homes in Coed Darcy in Neath Port Talbot, south-west Wales. The homes have
been designed to be low energy and will eventually be part of a mixed-use development of 4,000 new homes, spread over 1,300 acres. ThermoPlan
was specified to construct the initial homes, following its successful use in building the Prince’s Foundation’s Natural House - a project undertaken at
the BRE in Watford to show how dramatic cuts in energy use can be achieved simply, effectively and repeatedly with an established masonry system. The company says that the walls will have 30% less embodied energy and 50% less embodied carbon than conventional cavity block walls, meeting the same thermal performance.