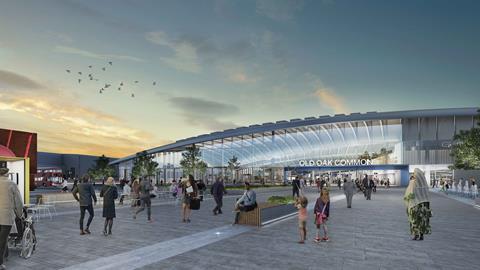 Teams led by Balfour Beatty and Mace look set to sign the contracts for the construction of HS2’s  two London stations as the standstill period nears its conclusion without contest from the losing bidders.

Speculation had risen that the teams who missed out on the £1.5bn deal to build Euston station and the £1bn contract for the construction of Old Oak Common station (pictured) were considering lodging legal challenges to the appointments.

But a spokesperson for HS2 said the standstill period was drawing to a close and that there had not yet been any official objections from the bidders that missed out.

Balfour Beatty, who has teamed up with Vinci and transport planning consultancy Systra, beat the Mace and Dragados partnership to the deal to build Old Oak Common station.

Bam Nuttall and Ferrovial, this time partnered with Fluor, missed out again, while a bid from US giant Bechtel was also overlooked.

The standstill period will come to a close when the contracts are signed, which is due to happen in the coming days.