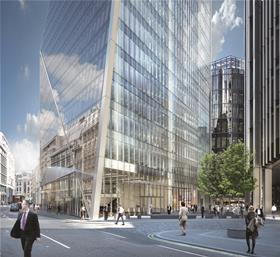 Building understands the two firms are in the running for the job to build the Kohn Pedersen Fox-designed tower for US insurance firm W.R Berkley, with a decision on the preferred bidder expected in the coming weeks.

According to construction data information provider Barbour ABI the job is worth £500m.

It is understood that Sir Robert McAlpine and Lend Lease has also bid for the job, but dropped out at an earlier stage.

The City of London granted planning consent for the 38-storey tower at 52-54 Lime Street – dubbed ‘the Scalpel’ - which will be home to W.R Berkley’s European HQ – in January.

The tower is planned to be 190m tall, consisting of 35 floors of offices above ground and mezzanine levels with an additional two basement and two roof plant levels.

The entrances to the building would be on Leadenhall Street and from a new public square.

Work on site is scheduled to start by the end of 2013 and it is anticipated that the development could be ready for occupation by 2017.

The development is funded by W. R. Berkley, which also intends to take up to 25% of the total office space.

As Building revealed in November, Arup is working as structural and mechanical engineer on the project and EC Harris as quantity surveyor.