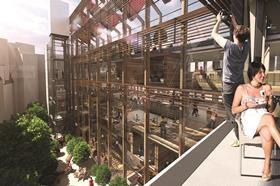 The London School of Economics is set to appoint Mace to deliver the £123m redevelopment of its Centre Buildings in London - the university’s largest construction scheme in 70 years.

Mace beat off competition from three other undisclosed contractors invited to bid for the prestigious Rogers Stirk Harbour + Partners-designed scheme.

Mace has been awarded a pre-construction agreement on the job and if this role goes to plan it will be confirmed as main contractor on the overall scheme, with a construction value of around £80m, in April 2016.

The job involves construction of two academic and teaching buildings of 13 and six storeys and a new public square at the Aldwych campus. Demolition contractor Cantillon is already on site clearing the way for the scheme.

Ken Kinsella, the London School of Economics’ (LSE) director of capital development, said the scheme was akin to “doing open heart surgery in the heart of the LSE” and praised Mace’s bid for its response to the logistical challenges posed by building in the centre of a live campus.

Kinsella added: “Mace had the hungriness for this job - the LSE saw that and it was a very positive response.”

Kinsella said the LSE’s ambition was “absolutely” to deliver buildings capable of winning the Stirling prize, referring to the university’s near-miss in last year’s Stirling prize, when its Saw Swee Hock student building was shortlisted but missed out to Liverpool’s Everyman Theatre.

He said the new Centre Buildings would feature more interactive teaching facilities and a “learning commons” at ground level, where there would be usable networked student space both inside and outside the building.

Terry Spraggett, business unit director for public sector at Mace, said the LSE scheme was “a huge win for the group” and a job it had been “tracking for some time”, adding that Mace had been targeting work with London universities.

Spraggett said that the higher education market was “exceptionally hot” and said clients should “align themselves with firms who can actually deliver”.

Mace has begun talking to potential suppliers and subcontractor packages will start to come to market over the next few months.

The building will be delivered using BIM and is aiming to achieve a BREEAM “outstanding” rating. The project is set to be completed by November 2018.