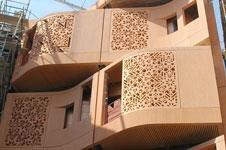 The owner of Masdar City in Abu Dhabi, Mubadala Development Company, is seeking to refinance a $2bn loan. The company is behind high profile UAE schemes such as the $1bn Sheikh Khalifa stadium and Masdar, the £13bn project aiming to create the world’s most sustainable city.

Masdar has been hit with delays, including the opening date for the Masdar Institute, designed by Foster + Partners, being pushed back from 2009 to in September 2010. The scheme also announced it was scrapping its overall completion date of 2016 in favour of an unspecified end date.

Mubadala is in unofficial refinancing talks with banks over a repayment due in April, according to reports.

The news follows the owner of fellow UAE developer Nakheel, Dubai World, asking creditors for a “standstill” on repaying $22bn of debt in November.