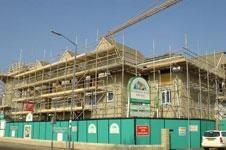 McCarthy & Stone has ramped up its land acquisition as part of its four-year £1.5bn development push.

In its half-year results to 28 February, the retirement housing builder said it bought 34 development sites over the period totalling 1,109 plots, up from 23 sites covering 892 plots the previous year.

The land buying push is part of the firm’s plan to invest £1.5bn in development projects over the next four years, as announced in November.

McCarthy & Stone’s revenue grew 49% to £149.7m over the half-year period, up from £100.4m the previous year, driven by higher volumes and selling prices.

John White, chairman said: “We are pleased to report significant improvements across our operations.

“We remain focused on leading the retirement housing market, both in terms of unit delivery and build quality, while growing our business profitably.

“Our previously announced business review, which is currently being implemented, will ensure that we operate efficiently while providing an increase in much-needed retirement housing across the whole market.”