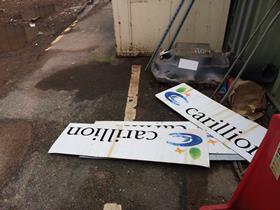 More details of the scale of the task facing Laing O’Rourke and Mace to complete the hospital delayed by the collapse of Carillion have now emerged.

Yesterday, the Royal Liverpool and Broadgreen Hospitals NHS Trust revealed that Mace had been called in to help finish off the scheme which has been idle since Carillion went bust in January.

In papers published ahead of today’s meeting of the trust’s board, the trust said: “Laing O’Rourke was not prepared to take any risk on either construction cost or timetable to complete – these risks sit with the Trust which we will manage this through Mace and the in-house project team.”

Now the trust has said one of the first tasks facing the new construction team is to modify the ventilation system in the anaesthetic rooms in theatres. This was identified when Carillion was on site but remedial works were not completed, it added.

In an update, the trust said work will be undertaken to gain access to areas of the structure requiring remedial works that were identified in a structural review of what Carillion had completed that was carried out by Arup earlier this year.

This includes the cracks that were discovered in structural concrete beams and the non-compliant cladding which was fitted.

In addition, work to review the existing lighting installation, where the energy saving system is not yet fully operational, will be completed in February. It will then be possible for the lights to be turned off when areas of the building are not occupied.

And for the first time the trust put a more specific date on when work will be completed. The hospital, which was due to be finished last year, is now expected to be completed towards the end of 2020 – three years late.

The trust said: "Laing O’Rourke will provide a detailed construction programme in the New Year and this will set out a timescale for handover towards the end of 2020.”

O’Rourke has been onsite for a little over two weeks working with project architect NBBJ and Arup to survey and clear the site.

The trust said this work would gather in pace from next week and continue for the next four months.

Mace is acting as the project manager, contract administrator and cost advisor while the trust said it would be making payments directly to Laing O’Rourke’s sub-contractors.

Trust chief executive Aidan Kehoe said: “This means that should the same situation befall Laing O’Rourke as it did Carillion, then the trust would simply look to appoint a new contract manager. Sub-contractors would continue to work and get paid as normal.”