An engineering specialist has picked up the latest package of works on offer at the £1bn Stratford Waterfront project.

Imtech Engineering has been awarded an M&E role on the V&A Museum’s new east London outpost in Stratford. 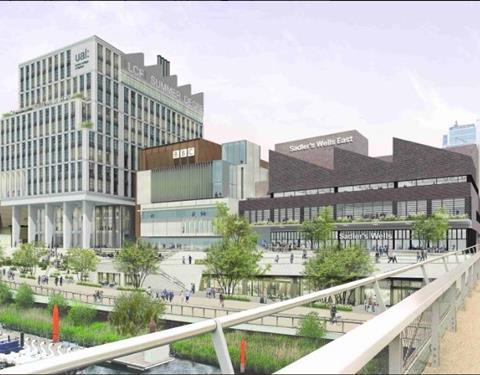 Stratford Waterfront includes a new BBC studio, a new Sadler’s Wells theatre and new premises for The University of the Arts London’s College of Fashion

Designed by Dublin-based architect O’Donnell + Tuomey, the five-storey scheme is part of a new cultural and educational quarter under construction at the Olympic Park known as Stratford Waterfront.

The £1bn development, which includes a BBC studio, a Sadler’s Wells theatre and premises for the University of the Arts London’s College of Fashion, has been masterplanned by Allies and Morrision and is being project managed by Mace.

Imtech’s £8m deal is the latest package of works to be handed out by project client, the London Legacy Development Corporation. There are 35 packages in total across the development’s four schemes, which are all due to be completed by 2022.

Engineering firms Kilnbridge, Bourne Steel, Techrete and Michael J Lonsdale are among the firms to have already won contracts on the project.

Earlier this month, LLDC launched a search for a development partner for two 600-home schemes in the park with a combined value of £600m.