Full public inquiry needed as matter of urgency in next Parliament 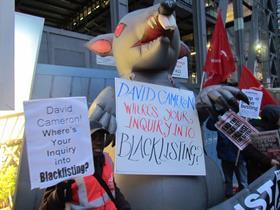 MPs have called on any new government after the general election to launch a full public inquiry over blacklisting as a matter of priority.

The Commons Scottish Affairs Committee has called for an inquiry after concluding many questions regarding blacklisting remain unanswered, including the full extent and breadth of the practice.

In its report ‘Blacklisting in Employment’ the committee called blacklisting an “odious” practice which could still be ongoing. The committee said: “The odious practice of blacklisting has blighted the working lives of many people in Scotland and elsewhere in the UK.

“We are specifically concerned as to whether the extent and breadth of the practice is fully known, and whether this odious practice is ongoing within the construction industry.”

Blacklisting came to light in 2009 when the Information Commissioners Office seized a database of 3,213 construction workers compiled by now-defuct organisation The Consulting Association for use by 44 construction firms to vet new recruits.

The Scottish Affairs Committee was scathing in its attack on the compensation scheme set up by eight contractors in 2013, known as The Construction Worker’s Compensation Scheme (TCWCS), for the victims of blacklisting.

The chair of the committee Ian Davidson acknowledged the eight firms behind TCWCS - Balfour Beatty, Carillion, Costain, Kier, Laing O’Rourke, Sir Robert McAlpine, Skanska UK and Vinci - had made an “effort”, but criticised their “unilateral introducation” of the scheme without victim and union support as an “act of bad faith”.

He also said the contractors had been “callous and manipulative” by “implying that the trade unions were in agreement with the scheme”, which the committee deemed was an attempt to mislead both MPs and victims of blacklisting.

The committee also endorsed the proposal that contractors ‘self-clean’ their businesses before being allowed to bid for future public contracts. The report said: “We concluded that self-cleaning was an important step as it places responsibility on contractors to demonstrate how they have changed, and to make amends for their past blacklisting activity.

“Firms who have not participated fully in an agreed compensation scheme after having been caught using the blacklisting service of the TCA or any similar conspiracy, should be deemed not to have ‘self-cleaned’.”

The committee concluded that both central government and devolved bodies such as the Welsh and Scottish government’s have a role to play as clients in making sure contractors’ had ‘self-cleaned’.

A spokesperson for TCWCS said it welcomed “the report’s recognition that they are the only companies in the industry that have taken any steps to apologise for their historic involvement” in blacklisting.

The spokesperson said the scheme offered a “faster and less stressful process than a court case”, with potential compensation awards between £4,000 and £100,000, and the contractors remained “fully committed to the scheme”, saying it had received more than 480 enquiries, 233 eligible applications and had compensated 149 people.

Victims of blacklisting are currently bringing a class action against contractors in the High Court.

The spokesperson added: “We were disappointed that that the launch of TCWCS was not supported by the unions; we note that the final report references our engagement with the unions prior to the launch and recognises key changes were made to the scheme as a result of these conversations.

“We strongly refute any suggestion that we had attempted to mislead any of our audiences or conceal the outcome of our discussions with the unions. That said, we wrote to MPs in July 2014 apologising for any ambiguity our original letter may have created.

Each of the eight companies involved in TCWCS is determined to ensure this issue stays in the past and would comply fully with any code of conduct - either statutory or voluntary - that may be introduced to this end.”