Multiplex storms to the top of both contractor tables 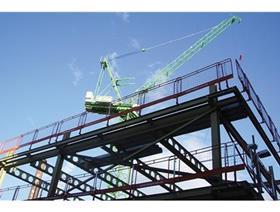 With five contracts in the past 12 months totalling £1.8bn, the firm is currently ranked third in the cumulative chart for the year, behind Balfour Beatty and Kier.

Balfour Beatty came third overall in March, thanks to £224.4m across 26 deals, with Kier placed fourth, with 69 contracts worth £217.8m with a mixture of work led by public, civils, commercial and housing.

Laing O’Rourke’s work on the Llanfrechfa Grange specialist critical care centre for the Aneurin Bevan Health Board earned it £180m, contributing the largest chunk of its overall fifth place-earning £201m. The firm is currently fifth in the cumulative chart, with £1.1bn from 29contracts.

Sixth-placed FM Conway’s highways work for Kensington and Chelsea and Newham councils earned it £147m out of six contracts, while Mace’s £140m housing work helped the firm into seventh position overall and fifth on the without civils list for March.

Skanska placed eighth overall with its £124m-worth of work boosted by a £100m contract to work on an office and retail development at 60 London Wall, in the capital.