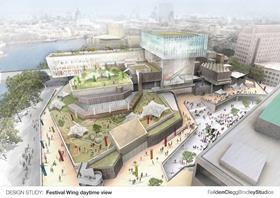 The director of the National Theatre has strongly objected to the Southbank Centre’s £120m expansion scheme by architect Feilden Clegg Bradley Studios.

In a 3,668 word statement of objection submitted to Lambeth council, revealed by Building’s sister title Building Design, Nicholas Hytner said the proposal would damage the ‘arts quarter’ on the South Bank and would have an adverse impact on the grade II* listed National Theatre, which sits next to the Southbank Centre.

Hytner wrote: “The National Theatre is a close and supportive neighbour to the Southbank Centre but over the last few months we have noted with growing concern the scale of the Festival Wing proposals.

“Having now read the full application and reviewed the details with our board we regret that we must make a formal objection to the applications submitted on behalf of the South Bank Centre for planning permission.”

Hytner claimed the proposed scheme’s Liner building would have a “wedge-like effect” between the theatre and the rest of the Southbank Centre including the Hayward Gallery and Queen Elizabeth Hall.

“We fear that the Liner building will be both a component of, and over arching metaphor for the further segmentation of the most dynamic arts complex in the country, if not the world,” wrote Hytner.

He also said he feared the scheme would have an impact on views from the theatre, as well as a loss of sunlight to its public spaces and terraces.

The objections of Hytner, who has commissioned architect Haworth Tompkins to help redevelop the National Theatre, were set out in a letter seen by Building Design.

Members of the public and interested parties can comment on Feilden Clegg Bradley’s plans for the expansion of the Southbank Centre until Friday, 5 July.