Proposals by Allies & Morrison to create a new town centre at Elephant and Castle in south London have gone on public display.

The scheme includes 1,000 flats and a new campus for the UAL’s London College of Communication along with a 1,000 seat multi-screen cinema and a music venue for an audience of 500.

The existing Elephant and Castle Shopping Centre will be redeveloped with the plans including around 6,000sq m of office space for university staff plus 12 innovation units for start-up businesses.

Plans will also include more than 10,000sq m of revamped public space as well as a new entrance and ticket hall for the Northern Line stop at Elephant & Castle.

Initial proposals were shown to the public last summer and feedback from residents and businesses has been included into the new designs. 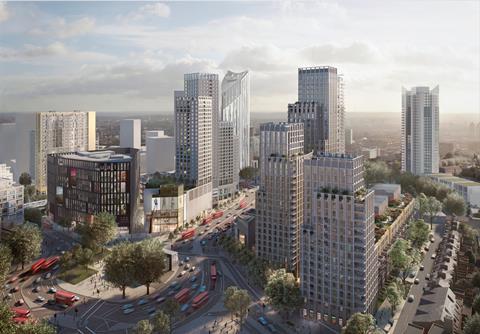 Developer Delancey, which is behind the scheme along with pension fund asset manager APG, is hoping work can start in 2018, once Southwark Council has given the scheme the green light.

Delancey chief executive Jamie Ritblat said: “Over the last three years we have been in ongoing discussions with key local stakeholders, the public and our partners at UAL in order to ensure we put culture, art, education and the needs of the local community, at the heart of our plans. We are confident that these proposals reflect this and look forward to receiving further feedback to help us deliver this vision.”

The area is undergoing a wider £3 billion regeneration that is being masterminded by Lend Lease. Architects working on the scheme include AHMM, dRMM and Squire & Partners.